A message of hope, against the Bayer-Monsanto lobby

In this newsletter: the Save Bees and Farmers delegation formally received by the EU Commission, the industrial agriculture lobby's attack on pesticide regulation in Europe, a new report reveals pesticide industry’s disinformation, 700 scientists calling for an immediate reduction of pesticide use...

The European Citizens’ Initiative (ECI) Save Bees and Farmers formally delivered the demands of 1.1 million EU citizens at the European Commission on November 25. What a great moment and a historical landmark! People will no longer allow the chemical and industrial farming lobby to douse our landscapes with poison and kill biodiversity and the soils, pollute the water and damage our health. They claim the right to live in a biodiverse world and want our farmers to be freed from chemical bonds. They want farmers to be rewarded to work with nature and their governments to ban any substance that is a danger to us all.

But, in the meantime, the lobby of the chemical industry and intensive farming found a willing ear among ministries and ministers of agriculture. With an extra ‘Impact Assessment’ – because of the Russian aggression against Ukraine – they try to delay or even completely derail the EU proposal for pesticide reduction.

This fits very well in the dirty tricks arsenal as described in Merchants of Poison: How Monsanto Sold the World on a Toxic Pesticide. The analysis draws from thousands of pages of internal corporate documents released during lawsuits. More explanation below.

Save Bees and Farmers formally received by the European Commission

On November 25, representatives of the ECI Save Bees and Farmers delivered a clear message to Vice-President Jourová and Commissioner Kyriakides: we want an end to the war against nature. To restore biodiversity and protect citizens' health, the use of synthetic pesticides has to be strongly reduced by 2030 and completely phased out by 2035. Next step will be a hearing in the European Parliament on January 24. 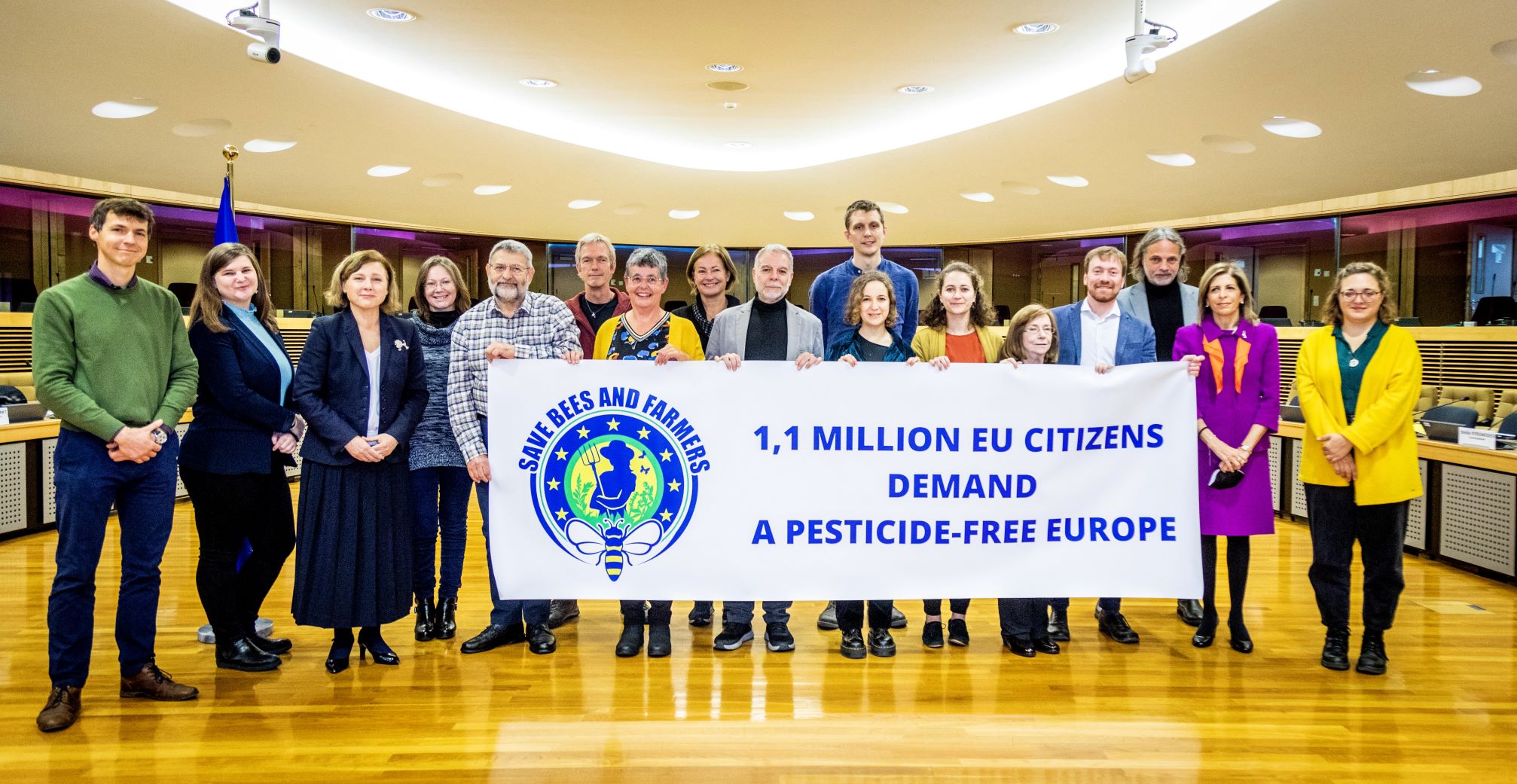 Read the press release here and the messages from the representatives of the ECI here.

Bayer-Monsanto & Co don’t like the EU proposal to slash pesticide use with 50%. Let alone the official citizens’ wish for an 80% reduction! They have been looking for ways to delay and derail the legal proposal and found a great excuse in the Russian invasion in Ukraine.  With food security as an excuse, their mighty lobby managed to convince agriculture ministers in many countries that another impact study must be done to see if pesticide reduction is currently possible. However, the real threats to farming are the loss of biodiversity, the deterioration of soil health and the loss of water-retaining potential: they call for immediate and drastic cuts in pesticide use. An extra study would delay the discussions for months. It might even not be possible to finish the legislative process in this period.

A new report Merchants of Poison: How Monsanto Sold the World on a Toxic Pesticide illuminates the disinformation, science denial, and manufactured doubt at the core of the pesticide industry’s public relations playbook. Centering the herbicide glyphosate (brand name Roundup) as a case study, the report is the first comprehensive review of Monsanto’s product defense strategy, including the disinformation tactics the company used to manipulate the science and attack scientists and journalists who raised concerns about glyphosate-based Roundup, the world’s most widely used herbicide. The analysis draws from thousands of pages of internal corporate documents released during lawsuits. 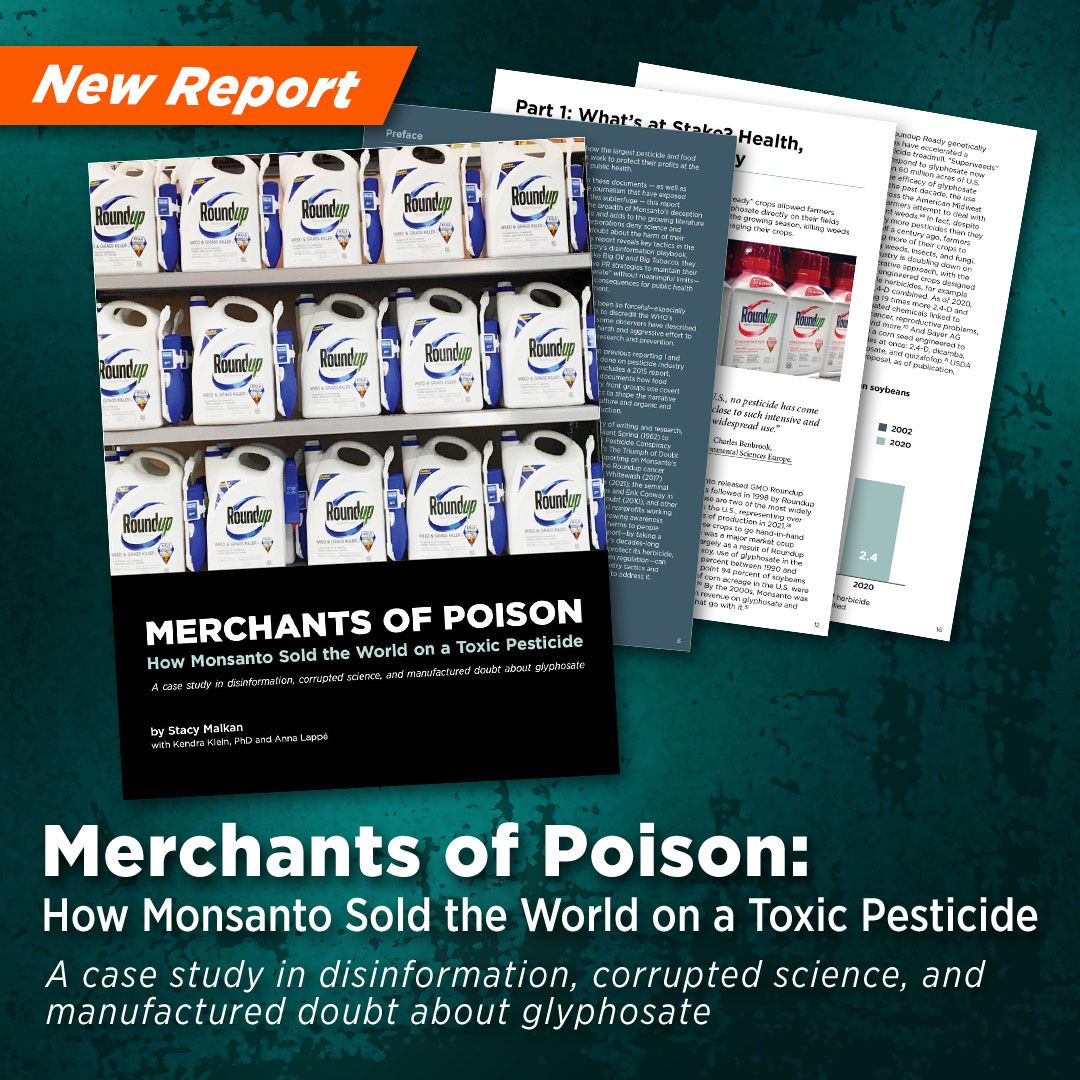 Read the report here: Merchants of Poison: How Monsanto Sold the World on a Toxic Pesticide.

Over 700 European scientists speak out for immediate pesticide reduction

‘The heavy use of pesticides in agriculture is strongly linked to declines in insects, birds, biodiversity in terrestrial and aquatic systems and detrimental impacts on global public health. Given the urgent need for reduction of pesticide impacts, it is worrying to observe that a number of Member State governments and Members of the European Parliament have recently called for the delay and/or watering down of the new pesticides regulation. As members of the scientific community, we express our deep concern.’

Read the full call here, signed by over 700 scientists from all over Europe.

Call for an EU ban on glyphosate

A coalition of 28 environmental and health groups asks for an immediately ban of glyphosate from the European market. ‘On the basis of the overwhelming amount of scientific evidence showing that glyphosate, and glyphosate-based products, likely cause serious diseases to humans and are toxic for the environment and its species.’

The organisations are deeply concerned about the EU Commission’s decision to extend the glyphosate license for yet another year, while waiting for a new assessment of available studies. In doing so, the authorities are mainly looking at studies conducted by the industry itself. In 2017 the European Parliament backed a full ban on glyphosate-based herbicides by December 2022 and supported immediate restrictions on the use of the substance. So it’s about time!

Support us – spread the news

2023 will be a decisive year for pesticide reduction and the struggle against the toxic companies. Will you support us? We won’t win this struggle with one battle, with one statement. It will be a fight with ups and downs. Two steps forward, one back: it’s been this way for a long time. We’ll only win with perseverance. We have to. There can’t be food and farming without biodiversity, healthy soil and clean water. We can no longer allow pesticides to slowly gnaw away our health, so we struggle for our future and that of our children, grandchildren and the generations to come. We must insure they inherit a healthy and beautifully biodiverse planet.

Thank you. We wish you and your friends and relatives a very happy Christmas.