In this newsletter: Bayer to pay billions to glyphosate victims, Justice for the French farmer Paul François, European Citizens' Initiative "Save the bees and the farmers", Tribute to Percy Schmeiser, and more!

The Monsanto Tribunal is over, but many people around the world keep on fighting against Bayer-Monsanto, and for a better, fairer and more sustainable world. This newsletter is an opportunity to keep yourself and your friends updated about the latest developments, and to discover other organisations and initiatives.

To deal or not to deal: Bayer to pay billions to glyphosate victims

Bayer is battling some 125,000 lawsuits linked to Roundup and glyphosate-based herbicides manufactured by Monsanto. Bayer offered an $11 billion (€9.3 billion) deal to stop most of the US court cases and compensate the victims. This deal was agreed with three law firms in September. But not all plaintiffs are happy with the settlement. Some don’t agree, because they will only receive a ridiculous amount of money despite years of expensive cancer treatments and ongoing pain and suffering. Others have died while waiting for a resolution. Meanwhile, the Californian Supreme Court denied Bayer a review of the 1st US Roundup case, Dewayne Johnson vs. Monsanto, so it still as to pay him $20.5 million. To be continued.

In October 2020 the French Supreme Court rejected Monsanto's last appeal and decided that the company is liable for health damage to French farmer Paul François who was a witness in the International Monsanto Tribunal. This is the final decision in a long legal battle of almost 14 years. The farmer had sued Monsanto for intoxication and illness related to the lack of labelling of Lasso herbicide. He won at the first instance, then on appeal and finally at the Court of Cassation. Now the Lyon Court of Justice will decide on the amount of damage to be paid. You can find the verdict on the website of Justice Pesticides, an organisation that collects all court cases and jurisprudences on pesticides in the world as information to help victims of pesticides. The organisation is closely connected to the Monsanto Tribunal and offers a tool in English and French for information and cooperation of victims, thanks to a database of legal cases that will help them to act themselves. Please consider to support them and to sign up (soon) to receive their newsletter.

Dangerous chemicals that are banned for use in the EU for environmental or health damages are still legally produced there for export to other countries. A new investigation from the Swiss NGO Public Eye shows that chemical companies, such as Syngenta and Ineos, make huge profits this way. And these toxic pesticides return to Europe through residues in food products. Of course the big chemical companies Bayer-Monsanto, BASF and Syngenta have put up a strong lobby to prevent a ban on this immoral practice. Civil society organisations are calling on the EU to halt the production and export of banned pesticides to third countries and close this loophole in the law. The EU commission has indicated that it may indeed consider a ban. 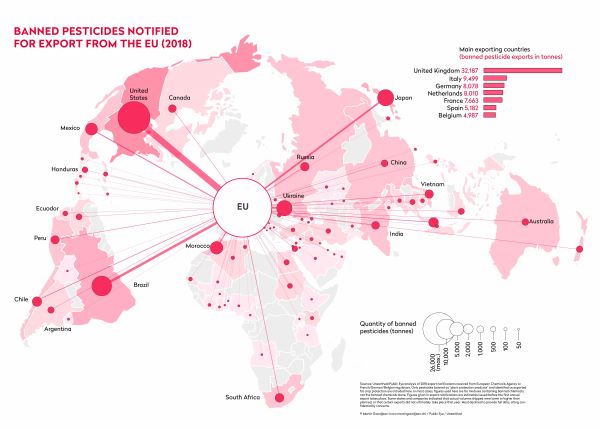 The Thai government had decided to ban 3 toxic pesticides, including to ban glyphosate in October last year, citing concerns over the impact of the chemical on human health. A few days before the ban was due to come into force, the government dropped the plan for glyphosate. Recently it became clear that this was the result of intensive lobbying by Bayer-Monsanto. This is detailed in more than 200 pages of partially redacted documents and emails, some directly between US officials and a Bayer representative. The documents were obtained under the US Freedom of Information Act by the Center for Biological Diversity.

Currently there are many lawsuits in the US against Bayer-Monsanto for damage caused by dicamba. This highly toxic herbicide is used to combat roundup resistant weeds. However, it is very volatile and easily reaches other fields and gardens, damaging crops and trees. Also, a recent study in the International Journal of Epidemiology links the chemical to increased rates of liver and bile duct cancer. Still, the US institute that regulates pesticides has given this poison another 5-year approval. It is high time for a New Green Deal and strict policies to restrict pesticides in the US.

New Studies to Address the Combined Cocktail Effects of Pesticides

Various research institutes in the EU are working on a targeted methodology to address the combined cocktail effects of pesticides. At present, the EU only assesses the impacts of single active ingredients, not the formulations as they are sold, and nor the combination effects when used with other pesticides. Experts say scientific consensus is emerging that the effect of chemical mixtures ‘needs to be taken into account and integrated more generally into chemical risk assessments’.

EU citizens: please sign the Save Bees and Farmers initiative!

Citizens from across the European Union call for a pesticides-free bee-friendly agriculture to the benefit of farmers, health and the environment. With this European Citizens’ Initiative, we call on the European Commission to support an agricultural model that allows farmers and biodiversity to thrive in harmony by cutting pesticide use by 80% by 2030. Now that the EU has announced to go for a substantial pesticide reduction target in the Farm to Fork strategy, it is crucial to show that citizens fully support this. Please sign and share widely, if you didn’t already do it already! 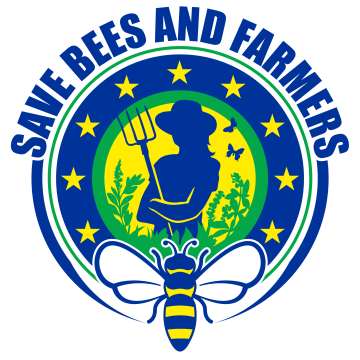 Towards the Recognition of Ecocide in International Law

The judges in the Monsanto Tribunal advised to hold the company accountable for ecocide: crimes against nature. This was a step towards inclusion of this crime in international law. In December 2019, the island state Vanuatu (severely threatened by rising sea levels) proposed the International Criminal Court in The Hague to make the destruction of the environment a crime. This spring the French citizens’ assembly, a group of 150 randomly selected people to guide the country’s climate policy, voted almost unanimously to make ecocide a crime. That prompted French president Macron in July to announce that the government would consult with legal experts on how to incorporate it into French law. Next development was that the new Belgian government decided to ask experts how to include ecocide in the revised penal law and take diplomatic steps to stop ecocide. In November a group of parliamentarians from different countries started the Ecocide Alliance, while a panel of international lawyers plan to draw up a legal definition of ecocide.

In a referendum on November 29th, the Swiss citizens, but not the majority of the cantons (regions), voted to accept the Responsible Business Initiative. However, a constitutional amendment must have both majorities: in that case, companies with headquarters in Switzerland could have been more easily held accountable for human rights violations and environmental offences. Now an only moderately binding counter-proposal comes into force. This decision is nonetheless a modest contribution to strengthening the campaign to include ecocide in the international legal system. There will nevertheless be lawsuits against the chemical companies Bayer and Syngenta in the future.  Keep in mind that Syngenta manufactures and sells the very toxic pesticide paraquat, banned in the EU but still widely used in the world.

Can you support our work?

Thanks for sharing our posts on social media and forwarding this newsletter to your friends! You could also help us with a donation. Our work is voluntary but we need some money to keep the testimonies online and website and social media running.

We are proud to report that Marcos A. Orellana, the registrar to the judges in the Monsanto Tribunal, has been appointed as UN Special Rapporteur on human rights and toxic substances. And also that Olivier de Schutter, former UN Rapporteur on the right to food, IPES-Food chair and an eminent member of the organising committee of the Monsanto Tribunal, is the new UN Special Rapporteur on extreme poverty and human rights. Congratulations to Marcos and Olivier and for the UN: it is very good to have such skilful people on these positions. 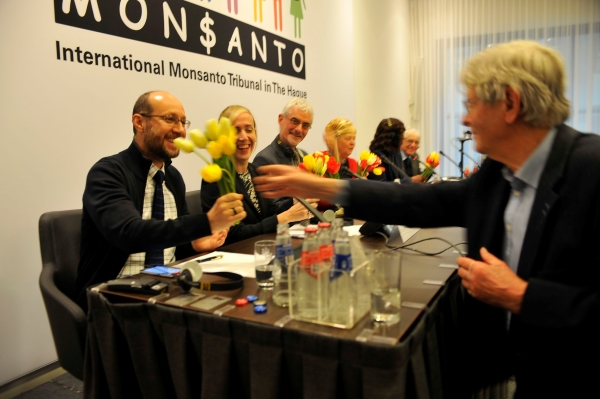 This gentle Canadian farmer fought against Monsanto and patents on seeds for many years. The multinational sued him, but he never gave up. As such, Percy was one of the witnesses at the Monsanto Tribunal. Thank you Percy, respect! Percy died quietly in his sleep, at age 89. A commercial movie ‘Percy’, has been recently released about this brave man and his wife Louise, and their struggle for seed freedom and farmers’ rights. You can watch his testimony at the Monsanto Tribunal here. 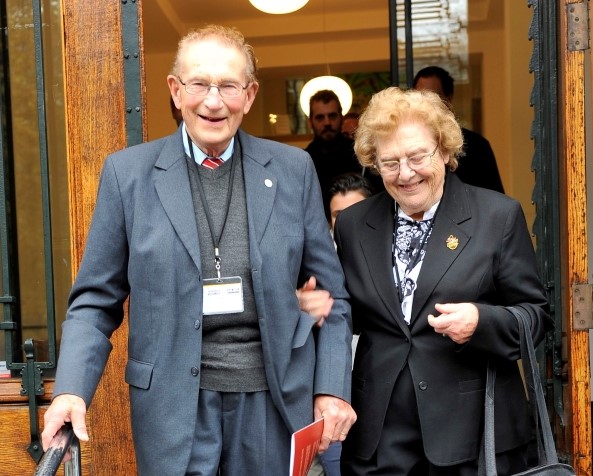